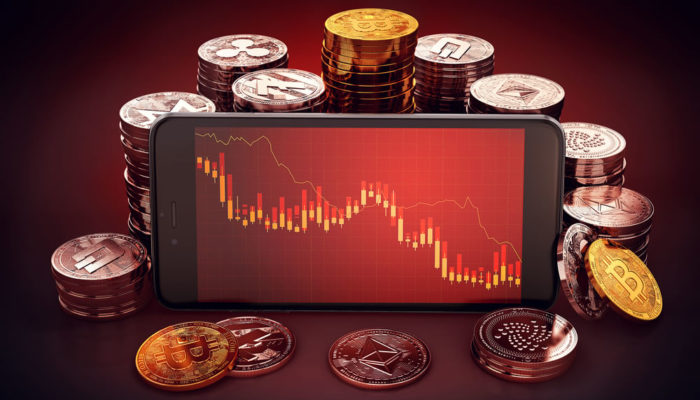 Crypto markets cool off on Monday; Litecoin, Cardano, Monero and Cosmos dropping back, Bitcoin dominance climbing. Market Wrap Crypto markets are starting to pull back this Monday morning and altcoins are taking the brunt of the losses. Total market capitalization has declined back to the $180 billion area but does not look like falling further for the time being.

Bitcoin has spent the best part of the past 24 hours at around $5,800. It dumped a few hours ago back to $5,670 before slowly climbing back up and over $5,700 where it currently trades. Volume is over $14 billion and BTC market cap remains above $100 billion. Bitcoin has also hit a new seven month high in terms of market dominance which is a fraction below 56 percent.

Ethereum has weakened again and fallen back towards support at $160, dropping almost 2 percent on the day. ETH prices have been gradually grinding up for the past three months but progress is painfully slow and is likely to be until there are so big fundamental developments for ETH.

There is no green to be seen on the crypto boards during Asian trading this morning. Altcoins are beating a retreat and Litecoin appears to be leading them. LTC has dumped over 5 percent on the day falling back to $73 as it jockeys for fifth place with EOS which has dumped almost 4 percent. Cardano is also 4 percent adrift at the moment while BCH and BNB have lost almost 3 percent.

The top twenty is all red with Cosmos losing over 7 percent of its recent gains. Monero, IOTA, Ethereum Classic and NEO are all dumping 4 – 5 percent at the moment and only Dash has remained flat on the day.

Today’s fomo pump is going on at Aeternity which has spike 6 percent over the past couple of hours. There does not appear to be anything fundamental driving this Ethereum competitor so AE could well see a dump tomorrow. There are no other major movements going on right now but Horizen has steadily marched up all week adding a further 4 percent today and NULS has entered the top one hundred with a 3 percent gain.

Maximine Coin is still getting trounced with a 15 percent loss over the past 24 hours. DigixDAO has also fallen back below $30 with a loss of 11 percent and Cosmos rounds out the worst three performing altcoins at the time of writing.

Total crypto market capitalization has declined by $5 billion since the same time yesterday. It is now back to $180 billion and still within the trading range reached early last month. Markets hit a five month high over the weekend so today’s correction is simply that, more consolidation is on the cards for now.

Market Wrap is a section that takes a daily look at the top cryptocurrencies during the current trading session and analyses the best-performing ones, looking for trends and possible fundamentals.

Oscar Carrington January 18, 2023
PrevWarren Buffett Claims Bitcoin is Like a “Seashell” In His Latest Attack on Crypto
Big Move Ahead For Bitcoin If These Fractals Play OutNext